The sports complex, which underwent a massive $32 million renovation beginning in 1999, seats 11,198 spectators. It ranks as the third largest facility of its kind in the Metropolitan Baltimore Area behind M&T Bank Stadium where the NFL Ravens play and Oriole Park at Camden Yards, home to Baltimore's Major League Baseball franchise.

The complex is named in honor of two legends - one a coach and educator who served the University for over 40 years - and a former pro football player who many consider the greatest quarterback in NFL history.

Towson Men's Lacrosse host Drexel at Johnny Unitas Stadium. Game time 12pm. Come out to support your Tigers in their first conference game of the season!!! 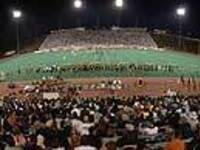