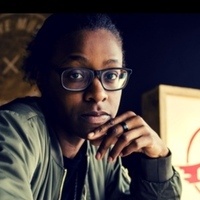 Aiwan Obinyan is a Nigerian-British, Filmmaker, Composer and Fashion Designer.

She has worked in the film and music industries, as a musician, studio engineer, composer and filmmaker. Her work has appeared on national and international TV and in 2013 she founded AiAi Studios a music production and audio post-production company specialising in music for artists, film & TV, sound design, editing and dubbing mixing