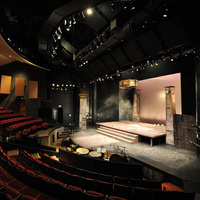 It’s the end of The Great Depression. Memories of two adult African American sisters weave together smells, sounds, textures and voices. Escapism and Hollywood “reality” is the lens in which children view racialized society, alcoholism, incest, poverty and socially constructed “beauty”. At the center of the sister’s memory catcher is Pecola, a little girl whose family circumstances drive her madly into the simple and sanitized world of Dick and Jane.

Adapted in 2005 by Lydia Diamond via Steppenwolf’s Young Adult & New Plays Initiative, The Bluest Eye was Toni Morrison’s first novel. The story is being retold by 21st century Department of Theatre Arts students and directed by Professor Tavia La Follette.

The Bluest Eye is produced by special arrangement with The Dramatic Publishing Company of Woodstock, Illinois.