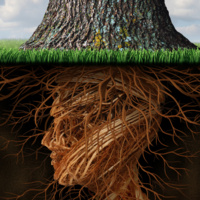 A Monster Calls is a coming-of-age tale about a 13-year-old boy, who must face his own imagination, in a world that is crumbling around him. Wisdom to face such a battle is found is in the lore of an old Yew tree—who has watched humanity evolve. The tree, a skilled weaver of tales challenges young Connor to confront his own truth.

A Monster Calls, based on the novel by Patrick Ness and inspired by an original idea by Siobhan Dowd, devised by Sally Cookson, Adam Peck and the Company.